Mira Minkoba is the Hopebearer. Since the day she was born, she’s been told she’s special. Important. Perfect. She’s known across the Fallen Isles not just for her beauty, but for the peace treaty named after her, an agreement which united the seven islands against their enemies on the mainland.

But Mira never felt perfect. She counts compulsively. She struggles with crippling anxiety. And she’s far too interested in dragons for a girl of her station.

Then Mira discovers an explosive secret that challenges everything she and the treaty stand for. Betrayed by the very people she spent her life serving, Mira is sentenced to the Pit—the deadliest prison in the Fallen Isles. There, a cruel guard would do anything to discover the secret she would die to protect.

No longer beholden to those who betrayed her, Mira must learn to survive on her own and unearth the dark truths about the Fallen Isles—and herself—before her very world begins to collapse. 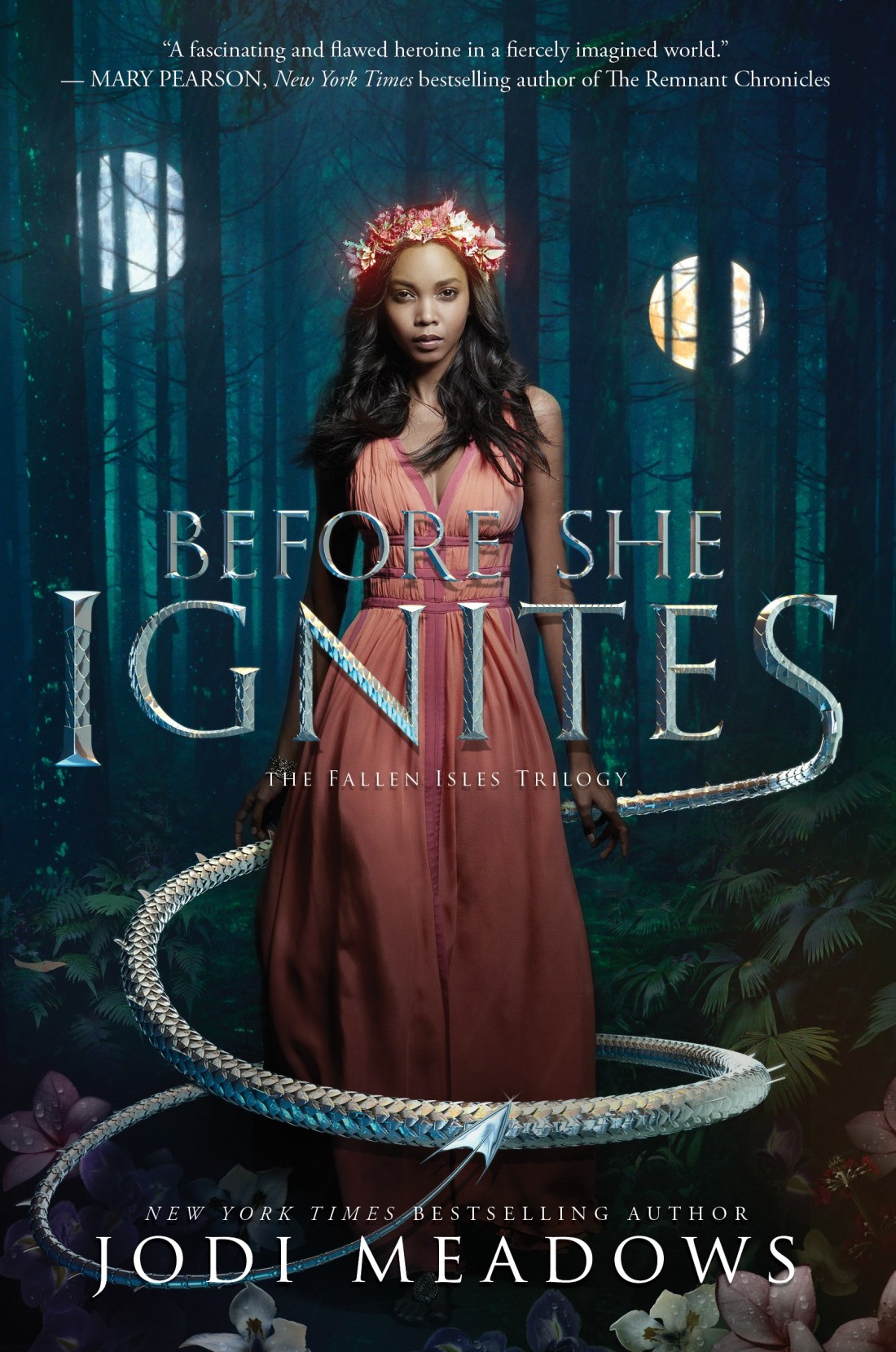 Before we get into this review! As some of you know I run the facebook group The YA Book Nerds and Before She Ignites is our October BOTM! So if you have read this or plan to in October and want to join in on the discussion that starts on the 29th of October then go and join the page!

I still don’t like covers with people on them but you can’t deny that this book is gorgeous. I love the colours of the cover and how dark it feels. I also love the back cover! The forest/woods with the dragon’s tail is so simple but represents the book really well.

This is my first Jodi Meadows book and I have heard pretty good things about her writing and I was not disappointed. For a 500 page book this was fairly quick. There were parts in the middle that was a bit slow but they were building the characters personalities and also the characters’ friendships, so they were needed and worth it.

I also really enjoyed the swap of past and future in the 2/3 or so of the book. It was good to have a break from those slower parts and it was also good to see what happened to Mira rather than just hearing it her thoughts and convos.

So even though the basis of this plot is fairly basic, it was done really well that it didn’t feel like ‘just another …….. book’. The whole book felt like it was building to a certain event and then there was something that happened about 3/4 of the way in that threw a spanner in the works and I no longer knew what to expect. I liked that this book had those unpredictable bits, however, there were some parts that were predictable too.

Mira was an enjoyable character. Even though she was kinda the ‘chosen one’ trope she felt a lot more realistic than most. She struggled most of the time to figure out what was wrong and right and what she should do. Also, the anxiety played a pretty big part of her life while in the pit which made her feel more real too. Even with all the struggles, she was still a strong character and I really enjoyed her.

Ilina & Hristo were also enjoyable characters. We mostly see them in the chapters that show the past. Hristo is loyal and caring & Ilina is passionate and strong. They would both do anything for what is right and their best friend.

Gerel was a pain, but the kind of enjoyable pains that you can’t help but like despite yourself. She was stubborn but smart and but also loyal to what she believes in and the promises she has made to the Fallen Isles. Aaru I still don’t know how I feel really. He is shy and quiet but also kind and interesting.

Altan is a pathetic person. He is one of those cruel characters that you aren’t meant to like. Even though he knew why Mira was in prison and knew it was a load of bull he still acting like she was no better than a murderer. It was pathetic considering he wanted the information she held.

Elbena, was also cruel. Again acting like Mira was at fault when it was actually her and her people that were doing the wrong thing. And delibertly allowing  a certain thing to happen just so she could turn the situation to fit her needs! In that moment, if I was there I would have strangled her. So much outright curelty.

I loved this book! It is an amazing start to a new fantasy series! The writing is amazing and I loved he use of chapters from the past and future. The main character is great and so are her friends! The plot is really well done and the world is amazing! I can’t wait for book 2 to be released! The only thing this book is missing is a map! This would be the perfect book to have a map in!

HAVE YOU READ THIS BOOK? WHAT ARE YOUR THOUGHTS ON IT?!
IF YOU ARE GOING TO SHARE SPOILERS IN THE COMMENTS THEN PLEASE WARN IT SO OTHERS DON’T GET SPOILED!
And please join our discussion if you have read this book! I can’t wait to discuss this book!

3 thoughts on “Before She Ignites by Jodi Meadows”