From the ground, we stand. From our ship, we live. By the stars, we hope

The incredible new novel by Becky Chambers, author of the belovedThe Long Way to a Small, Angry Planet.

Centuries after the last humans left Earth, the Exodus Fleet is a living relic, a place many are from but few outsiders have seen. Humanity has finally been accepted into the galactic community, but while this has opened doors for many, those who have not yet left for alien cities fear that their carefully cultivated way of life is under threat.

Tessa chose to stay home when her brother Ashby left for the stars, but has to question that decision when her position in the Fleet is threatened.

Kip, a reluctant young apprentice, itches for change but doesn’t know where to find it.

Sawyer, a lost and lonely newcomer, is just looking for a place to belong.

When a disaster rocks this already fragile community, those Exodans who still call the Fleet their home can no longer avoid the inescapable question:

What is the purpose of a ship that has reached its destination?

*Throughout this whole review I will refer to the previous books in this series as ‘Book 1’ & ‘Book 2’ as the titles are just so long!
Book 1 = A Long Way to a Small Angry Planet
Book2 = A Closed and Common Orbit

I highly recommend the audiobooks for this series! They are really well done and I enjoy them a lot. It also may make it easier to read via audiobook as this is a slower, very character driven series with not a tonne of huge plot points. So the audiobooks were awesome.

Next, I didn’t like this one as much as the first two books in the series. This series is made up of companion novels. So we follow different characters in each book. Book 1 followed the crew of a ship with the main character being a human woman. The next book follows an AI that we meet in book 1 and her adventures after the events of book 1. This book does not follow any of the characters we have met before and also takes place directly after book 1. So the events of Book 2 & Book 3 actually happened at the same time. Which I thought was interesting.

As for why I didn’t like this one as much as the first two. I think the main thing is because this one follows multiple points of view. In Book 1 we follow 1 POV in Book 2 we follow 2 POV and in this one we follow 5 (well 6 actually but the 6th is actually a characters documentation of meeting with humans. It made it a little more difficult to connect with the characters. We still get to know them but I just didn’t have that same connection that I had with the MCs from Books 1 & 2.

I did enjoy that we got to meet another species up close in this book. We meet a Harmagian named Ghuh’loloan. So that was really interesting. In previous books, we met other species but hadn’t gotten to know a Harmagian before. I love how other species react to humans sometimes. It’s amusing as! In Book 2 another species (I can’t remember which it was) meets a human and the human cries and the other species freaks out. It was just hilarious.
All of the species in this book are so thought out and written so well that they feel real.

In this book we explore more of the human side of things and how they are living in space however many years after they had to leave earth. We also learn about some of the jobs and just how life runs there which was quite interesting.

This one has very little plot to it. There is a rather big event that happens in the beginning and everything kind of stems from that. There are a couple other events that stem because of that event but the book is mostly about learning about the characters and their lives.

Because of the lack of plot, this book kinda stopped a little abruptly. I was just listening, looked down at my phone and realised I was on the last chapter. It still ended nicely but because there wasn’t a huge plot point and then a resolution and conclusion, it just didn’t feel like the end.

I did enjoy all of our main characters. First, we have Isabel who works in the archives and lives with her Wife Tamsin. She is also the one that has the Harmagian, Ghug’loloan staying as a guest. I loved reading her interactions with Ghuh’loloan, there is a lot of sharing of info as the Ghuh’lolaon is very curious about the Exodans. I really enjoyed both Isabel & Ghuh’lolan & Tamsin too for that matter. Isabel is such a kind, intelligent person. Tamsin is a little more fun but also strong minded. I also just love Isabel & Tamsin together. They are an older couple but still go out and do ‘young people’ things together and have fun. Ghuh’lolan is really nice too and also amusing when it comes to interacting with other humans and things that humans see as normal.

Next is Tessa. Tessa is married to George & mum to Aya & Ky. Tessa is just living life, working and looking after her family, including her rather stubborn father. George is away for work so she is left to look after Ky & Aya. Ky is only 2, so he is very active and hilarious at excuses. Aya is I think around 6-8 I don’t remember and she is very strong-willed. Tessa is an interesting character but probably my least favourite out of the MCs. Just because I don’t feel like I got to know her as much as others.

Eyas is our next MC and she has quite an interesting job. I won’t go into details though. She is very passionate about what she does but it makes it difficult for her to make real connections. I love her friendship/thing with Sunny. It was very natural and he is just so nice. Eyas just wants to help wherever she can and do what she thinks is right.

Sawyer is an outsider that moves to the Exodus Fleet. He just wanted change and is just trying to figure out how to live in the Fleet. It’s fun watching him trying to navigate this new life & he just wants to fit into life with the Fleet.

Lastly, we have Kip. Who is a teenager, still going to school, trying to figure out what to do with life. He is quite a sensible and kind kid and tries to do right. He sometimes gets led astray by his friend, but he sorts it out in the end. He is a nice guy and just wants to find his place in the world. Well not world, in the universe.

Even if I didn’t love this one as much as Book 1 & 2 I still loved it. It has an amazing diverse change of characters. EXCELLENT world building & unique ‘alien’ species. What more could you want from a heavy Sci-Fi. Usually, I complain when there is little plot but it just works so well with this series. Highly recommend the whole series!
I seriously hope this series gets more books in this world! It’s just so interesting! I would love to read from the POV of one of the alien species. That would be super interesting too.
Also just a note, you could read this one as a Standalone as it’s a completely new set of characters in a different area of the universe. It could be a little confusing as they do mention other species that don’t get explained in this one as we have already learnt all about them in the other books. But it could be done. But I do recommend the others.

I was provided with an eGalley of this book in exchange for an honest review. Thank you very much to Hachette Australia & NetGalley for this opportunity.

You can purchase a copy for yourself at any of the links below. 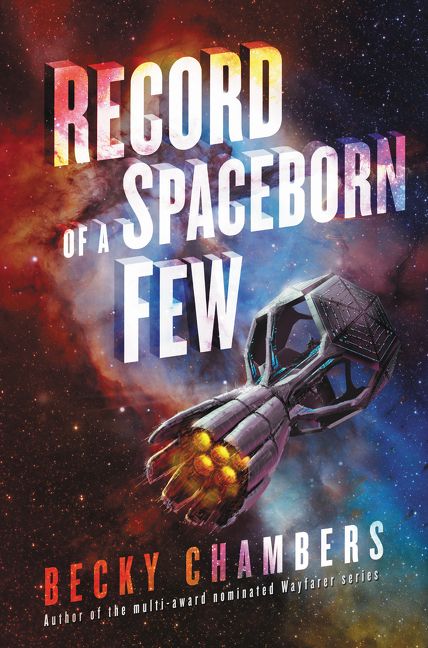 Aussie? Want quick shipping? Awesome prices? Want to be able to use AfterPay? Maybe try Booktopia or even Angus & Robertson!