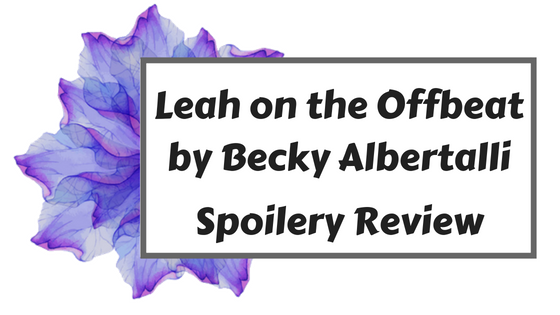 Leah Burke—girl-band drummer, master of deadpan, and Simon Spier’s best friend from the award-winning Simon vs. the Homo Sapiens Agenda—takes center stage in this novel of first love and senior-year angst.

When it comes to drumming, Leah Burke is usually on beat—but real life isn’t always so rhythmic. An anomaly in her friend group, she’s the only child of a young, single mom, and her life is decidedly less privileged. She loves to draw but is too self-conscious to show it. And even though her mom knows she’s bisexual, she hasn’t mustered the courage to tell her friends—not even her openly gay BFF, Simon.

So Leah really doesn’t know what to do when her rock-solid friend group starts to fracture in unexpected ways. With prom and college on the horizon, tensions are running high. It’s hard for Leah to strike the right note while the people she loves are fighting—especially when she realizes she might love one of them more than she ever intended

Firstly let’s talk about a few more things I had an issue with to do with Leah and elaborate on a couple things.

Let me talk about something I mentioned in the Anger Management Issues section. As I said half the time the reason she snapped was over nothing much. One example of this, the love interest, Abby & the guy Leah is leading on, Garrett is talking and they bring up the trip that Abby and Leah will be taking soon. Abby makes a joke and says “What happens in Athens stays in Athens” & Garrett replies with a raised eyebrow and a “Say no more”. They are just messing around but Leah takes it to a whole other level. She snaps & storms off and what is going through her head is that if Garrett is interested he should have taken Abby’s comment as a threat to his relationship and that if one of the guys said it there would be competition.
So first thing, he does know you are bi or that Abby is, so why would he think that is a threat to his relationship, my mates and I say shit like this all the time, that doesn’t mean we are hitting on each other… Second Abby has a boyfriend, yeah not everyone is loyal but you would think one of your friends wouldn’t go round actually flirting with someone else just to create issues in your relationship. Third, YOU ARE LEADING HIM ON!!! What do you care if he feels threatened anyway!
THENNNNN after this happens, the next day Garrett texts and apologises and Leah makes him promise to “stop being a dick” Uhm HI. He did nothing wrong except join in a joke! You’re the one throwing tantrums and acting like an ass.

My next point is actually related to the end of that last one and it is how Leah treats Garrett. Not only does she give him false hope and leads him on but she lies to him as mentioned in my spoiler free review. She also refers to him as ‘only Garrett’ more than once, like he isn’t even worth her time at all. She calls him annoying ALL THE DAMN TIME but in the book he does nothing annoying towards her except the awkward stages where he is nervous about how Leah feels about him and he is asking her to games or complimenting her and such. Not annoying, just nervous. If you have told the truth from the beginning this wouldn’t be happening because he would know you aren’t interested. Then there was this bombshell of a comment!
“I have to admit, I like the feeling of being pursued, even if it’s only Garrett. It just feels nice. And maybe nice is kind of refreshing.”
So you are leading him on because it feels nice to have someone interested in you. Wow bitch, wow.

I just want to touch on something Leah thinks at one point. This has more to do with why the author included this than about Leah herself. So that is why this is in the writing section. I actually saw a picture of this quote on Facebook but didn’t realise it was from this book as the person didn’t say. But this is the quote
“The daily cringe, starring Garrett Laughlin. Today’s episode: Garrett missed the memo  about not calling women ladies”
Overall, this is just confusing. I think I may have missed the memo on what the problem is with calling people ladies too. When I first read it I thought it may have had something to do with not assuming labels and prefixes and such. But in the sentence, she calls them women, so it obviously has nothing to do with what names/words people choose to identify with. So I have no bloody idea what the problem is with calling a group ‘ladies’… I understand some women not liking being called ‘madam’ as that has more that one meaning and the one people have an issue with is that it can refer to a female pimp of sorts in the prostitution world. However, if someone knows why ‘ladies’ is an issue please enlighten me because no one had an answer on that post I saw on facebook either. I even looked it up on Urban dictionary because I thought I might have missed something but no ‘lady’ there means pretty positive things. So I don’t know.

Okay, now next I want to talk about the biggest problem I  had and this was the one that I saw prior to reading the book and that is the “lowkey bi” situation. If you don’t know. In the book, Abby comes out to Leah as ‘Lowkey bi’. She is only just trying to come out and figure out her sexuality. She always thought she was straight, but with Leah, she is realising that may not be true. Which is great, a lot of people realise their sexuality when they meet a certain person that makes them realise.
The negative thing about this is when Abby comes out to Leah she completely shuts Abby down. She tells her that ‘lowkey bi’ isn’t a thing and tries to force her to come out as bisexual because she is just in denial. I’ll add quotes just so you get the full blow of it.

This entire thing is not fucking on! Leah never even apologises for this or even ever thinks that maybe she was wrong. After she walks off it is never mentioned again and then later Abby just comes out as bi.
At no point should you ever force someone into a box or force a label on someone! If someone wants to come out as bisexual, awesome and if someone wants to come out as ‘lowkey bi’ that’s amazing too. In this instance, she was just trying to figure everything out and if ‘lowkey bi’ is what suited what she felt then she has every right to use it. After reading ‘lowkey bi’ I thought, yeah that makes sense a little for me too. I’m bisexual, I not sure if I 100% love that specific label as I feel that I like males and females differently, so lowkey bi also kinda works for me, still not spot on but it doesn’t have to be. Sexuality is about expressing who you are and who you are attracted to, everyone is different and there isn’t just one word to describe every group.

The lowkey bi thing really was the downfall of this book! I love Albertalli’s other books for the diversity and how it also sends a good message, to be who you are and choose what you want. But this does not sit right with me at all. This is not the only quote from this book that actually got under my skin. In a book where you are trying to relate and help people these quotes just aren’t fair. If you want to use quotes like this then fine, but have another character call that person out and make sure the person that says it realises how wrong it is, especially when it is the main character that we are meant to enjoy! Make a lesson out of it! But how it was used in this book, I just can’t accept that and I most likely won’t support this author again when these are the types of messages she is sending to readers.

Well, I think that is all I want to talk about. There were other things that bugged me, but I have been working on this review for 4 days now and I’m sick of pulling myself down every time I have to remember the hurtful shit that was in this book. So I am ending it here.