Sixteen-year-old and not-so-openly gay Simon Spier prefers to save his drama for the school musical. But when an email falls into the wrong hands, his secret is at risk of being thrust into the spotlight. Now Simon is actually being blackmailed: if he doesn’t play wingman for class clown Martin, his sexual identity will become everyone’s business. Worse, the privacy of Blue, the pen name of the boy he’s been emailing, will be compromised.

With some messy dynamics emerging in his once tight-knit group of friends, and his email correspondence with Blue growing more flirtatious every day, Simon’s junior year has suddenly gotten all kinds of complicated. Now, change-averse Simon has to find a way to step out of his comfort zone before he’s pushed out—without alienating his friends, compromising himself, or fumbling a shot at happiness with the most confusing, adorable guy he’s never met. 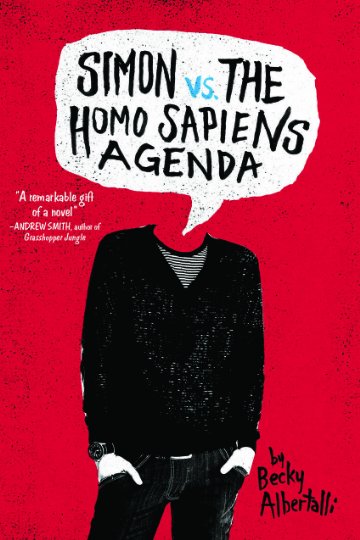 You can find my spoiler free review of The Upside of Unrequited HERE!

I honestly don’t like this cover, like at all. I like the cover of The Upside of Unrequited a bit more but still didn’t love it. The Simon cover just kinda looks cheap and basic and I just don’t like it.

My opinion of Becky Albertalli’s writing is the same in this book as it was for The Upside of Unrequited! These books drag you in and you just get so invested in the lives of the characters in this book. I feel as invested in these characters in 300 pages as I would usually feel in the last book in a trilogy! These books are also really quick reads! Each I read easily in a day!

I really enjoy that in Albertalli’s books there is the main plot, but also side plots going on, but they also feel like they are main plots too! I love that these books also deal with major topics but bring it into an awesome, funny and cute book! I just love everything about these books!

I’m not going to lie though, this book was a little predictable and I guessed who Blue was like half way through and was right.

Again a pretty diverse range of characters! We had Gay, Lesbians, Bisexuals, Jews & Dark characters (I don’t believe it was actually stated what nationality Bran actually is, so I don’t want to make a guess). We also had people from divorced families, which I respect as being from a divorced family myself.

I really like Simon and being in his head for this story was hilarious. Just the way he thinks was so funny and a great perspective to read from! I feel like I can kinda relate to him too, but for the life of me, I don’t know how really as I haven’t been through any of these things myself!

There are a lot of characters I want to talk about, so I’m going to try and keep it to one or two paragraphs. And they are in no particular order of how much we see them in the book, I’m just writing it as I think of people.

Martin was an ass, I don’t care what happens throughout the rest of the book, I still don’t like him. He seemed genuinely upset at the end there though, so maybe he at least understands his mistake, even if it doens’t take back what he did.
I enjoyed Abby a lot, she was the cool best friend that you could do silly things with and there was never really an issue.
Nick, I was really excited to see as he was the one mentioned in The Upside of Unrequited that was with Simon at a certain thing, so when we meet him I was excited as! But also he is a cool character and I enjoy that nothing will get in the way for his love of both music and video games haha.
Leah was a little grumpy and annoying some times, but there was a reasoning behind it, but she was one of those characters that you just wanted to help feel better because even if she didn’t see ‘the thing’ coming, the rest of us totally knew how it would play out.
Garret, we don’t see too much of, he is just kinda in the back ground a lot of the time. Same with Bran, but I still thought Bran was the quiet and cute type.
I really liked their theatre teacher, she was awesome and passionate!
I also really liked Simon’s Sister Alice, she was understanding and caring, even though she wasn’t around. I also liked Simon’s Younger Sister Nora too, I don’t know how old she was but she seemed pretty mature for a younger sister and I liked that she was understanding as well. She was also caring enough to show Simon a certain thing rather than just ignore it and let him figure it out.

Those are all the ones I can think of right now, but I know there are more. But that is all I think!

I really loved this book and from now on Becky Albertalli is an auto buy author. Even though I’m not a romance reader, I have a soft spot for LGBT+ romances. I think one of my main isues with romances in books as they are always so damn typical and over done! And it’s nearly always the same type of romance with similar characters. So for that reason, I don’t mind LGBT+ romances as they are usually more unique and also, being a bisexual myself, I like seeing these diverse characters!

Anyway, I love these books! They are fun, hilarious and cute books with amazingly diverse characters and great plots! I highly recommend them both!