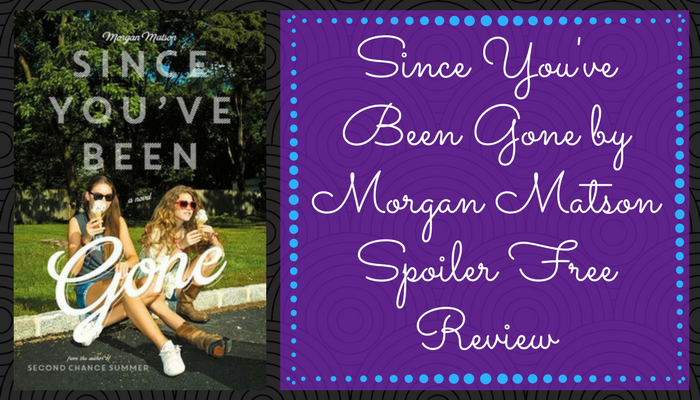 It was Sloane who yanked Emily out of her shell and made life 100% interesting. But right before what should have been the most epic summer, Sloane just…disappears. All she leaves behind is a to-do list.

On it, thirteen Sloane-inspired tasks that Emily would normally never try. But what if they could bring her best friend back?

Dance until dawn? Sure. Why not?

Emily now has this unexpected summer, and the help of Frank Porter (totally unexpected), to check things off Sloane’s list. Who knows what she’ll find?

This cover is alright but personally, I don’t like books with people on the cover, but that’s just me. But besides that it is a nice cover, it would have made more sense to have them eating pizza or something as it seemed like they hadn’t actually been to that ice cream place before Emily has to go there..

I really enjoy Morgan Matson’s writing. This is my third book of hers I have read and I have enjoyed it in all three. Her writing is quick and easy to read and also always has some added feature in it. In The Unexpected Everything it was parts of a story written by a character, in Amy & Roger’s Epic Detour it was scrapbooking & playlists and in this one it was playlists and the list. However this one was a bit less interesting, I would have liked it done more in the style that Amy & Roger’s Epic Detour was done as it looked like someones actually book or paper that has just been scanned and chucked into the book. I would have liked if the list was written in Sloanes writing, not just normal text. I also wished the playlists looked more like screen captures of Emily & Franks iPods, rather than a table with the song names and artist. That would have just added that little bit more. Also, I read this via an eBook, so it might be designed differently in the physical copy, I don’t know.

I also enjoyed that there were sections that were Emily’s memories and they weren’t exactly in any order, they just happened to somehow match the current situation of the book, which I really enjoyed.

I thought this book was really interesting, even from the synopsis the bucket list type thing that was suggested sounded really interesting. This book, though was action packed and extreme it was still fairly full on. Except for at the very beginning this book is fairly fast paced for a contemporary. Matson skipped over all the boring parts and just got to the main plot, which I enjoyed.

As some of you will know I’m not a huge romance reader and this is a romance. However this wasn’t too heavy on the romance, it was kinda there and then at the end it’s more prominent but it didn’t take away from the actual plot.

I enjoyed Emily as a character and liked seeing her develop and grow in this book. Her struggle was something that a lot of people have to deal with, so I enjoyed seeing that represented in the book. Frank was also enjoyable, he was fun and intelligent. He was a good friend, was caring and picked up on the little things about people easily.

Collins at first I thought was a bit of a tool but I began to like him a bit more towards the end. He started showing the real him towards the end rather than the show he puts on for everyone else. Dawn was an interesting character, she kinda just turned up quickly, but it also felt realistic of how she became friends with them all. I am disappointed that we didn’t get to see what happened in the end with Emily, Collins & Dawn.

Sloane, we mainly only see through the memories, as she disappears, just like the synopsis says. I didn’t really know what to think of her as mainly all the memories were fun things and showed their friendship. But there was also a certain memory that I didn’t particularly like and I don’t think she made the best choice, but overall she was fine. Sam we barely saw but I didn’t like him, he was a bit obsessive and a jerk… I don’t know what to think of Gideon (I don’t know if that is spelled right but I can’t find his name in the book as he isn’t mentioned much and I’m trying to find it on an eBook..). Anyway, I don’t really know what the point was of him being in the story. It was kinda left unfinished with him and I just don’t know what to think. I don’t support what Emily did though when it comes to him…

Overall, I enjoyed this book and only had a few small issues. This was a light and easy read. This would also be a good ‘summer read’… That honestly doesn’t mean much to me being Australian, but I get the idea.