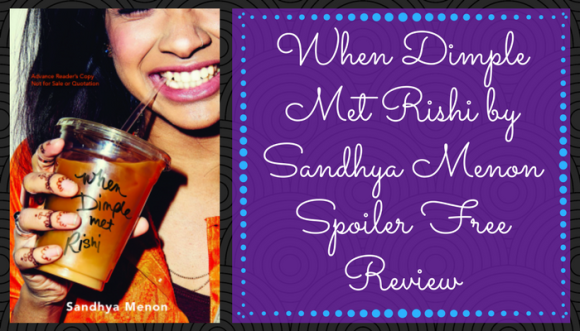 Dimple Shah has it all figured out. With graduation behind her, she’s more than ready for a break from her family, from Mamma’s inexplicable obsession with her finding the “Ideal Indian Husband.” Ugh. Dimple knows they must respect her principles on some level, though. If they truly believed she needed a husband right now, they wouldn’t have paid for her to attend a summer program for aspiring web developers…right?

Rishi Patel is a hopeless romantic. So when his parents tell him that his future wife will be attending the same summer program as him—wherein he’ll have to woo her—he’s totally on board. Because as silly as it sounds to most people in his life, Rishi wants to be arranged, believes in the power of tradition, stability, and being a part of something much bigger than himself.

The Shahs and Patels didn’t mean to start turning the wheels on this “suggested arrangement” so early in their children’s lives, but when they noticed them both gravitate toward the same summer program, they figured, Why not?

Dimple and Rishi may think they have each other figured out. But when opposites clash, love works hard to prove itself in the most unexpected ways.

This is probably going to be the weirdest review you read. Even though I think this was a beautifully written book with a great diversity of characters, I also didn’t love it. I am quite simply not a romance reader and this book was just too much for me. But it is still a great book and I highly recommend it to everyone that does enjoy romance!

Even though I don’t usually like covers with people on the front, I do really like this one as the person on the cover matches the description of the MC perfectly, same with the back cover with Rishi & Dimple on it! So often books with people on them don’t even match the MC description (just look at the multiple editions of the Anna and the French Kiss books). So I was really happy to see a book that matches! I also like the simplicity of the cover but it portrays the book perfectly.

The writing of this book was great! My only problem was the combination of Hindi (I think) in the speech parts of the book. I don’t speak Hindi, so it was a tad confusing as even though some of it was explained/translated, there was a lot that wasn’t. At the beginning, I did try and google the translation, but it messed with the flow of the reading, so I stopped bothering and even though I didn’t feel like I missed anything not understanding those parts, but it was still a little annoying not knowing the meaning of them.

The plot of this book was fine but like I said the main focus is the romance, so I wasn’t obsessed. But I did love the rest, the app designing was really interesting and I’m curious if anyone has actually created an app like that as I think it legitimately would be helpful. I also really enjoyed the comic side of things too! It was also interesting learning some things about their culture.

I did find the plot a little predictable at times, but there is very few contemporaries that I have read that I haven’t found predictable.

I enjoyed that there was a fairly diverse bunch of characters. Not only did we have 2 Indian MCs but also Dimple’s room mate is, I am guessing, bisexual as she mentions have a girlfriend previously but is in a relationship with a male within the book, so just guessing the bisexual part.

I did enjoy Dimple as a character and I mostly enjoyed being in her head as I found it funny and similar to myself, her way of thinking, even if she didn’t say a lot of things out loud.

Rishi was a little annoying at times as he kinda went on and on in his head about Dimple and relationship/marriage things (Dimple did it too but not as often or as excessive). Besides that, he was pretty cool and I enjoyed his passion for comics even if he tried to down play it.

I enjoyed Celia at the start and at the end, in the middle though I wanted to slap some sense into her but she came round and figured it out for herself eventually anyway and then I was back to liking her but I just can’t stand the type of people that act like she was acting in the middle there.

Well, they were the main ones, but I also want to talk about a few others. Ashish, I did enjoy and I loved his development with his brother towards the end. Hari & Evan were just typical jerks. Isabelle, I didn’t like, even though she acted like she was the victim the same as Celia in that middle part, she still kept pretending afterwards.

The book was okay. It’s a fun cutesy romance, but romances just aren’t for me. But I enjoyed the other elements of the story and most of the characters. The writing was really good and the so was everything else, just not a book for me.

i’ve been meaning to read this book for, like, months now but i still don’t have the time 😣 also, i’m not much of a romance reader too but i figured it sounds really cute? idk but i just want to give this book a read.

It is a cute book, but just not for me.
I hope you enjoy it more than I do when you get to it. 😊

Hi! I also read this book recently (actually I listened to the audiobook). I agree in that I liked the sense of humour in this book, but also found it to be predictable and cheesy. Great review and thanks for sharing 🙂

Thanks! Totally agree! Cheesy as hell, but still hilarious and a really good book. 😂