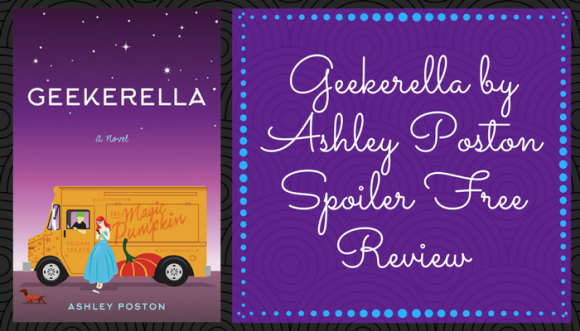 Anything can happen once upon a con…

When geek girl Elle Wittimer sees a cosplay contest sponsored by the producers of Starfield, she has to enter. First prize is an invitation to the ExcelsiCon Cosplay Ball and a meet-and-greet with the actor slated to play Federation Prince Carmindor in the reboot. Elle’s been scraping together tips from her gig at the Magic Pumpkin food truck behind her stepmother’s back, and winning this contest could be her ticket out once and for all—not to mention a fangirl’s dream come true.

Teen actor Darien Freeman is less than thrilled about this year’s ExcelsiCon. He used to live for conventions, but now they’re nothing but jaw-aching photo sessions and awkward meet-and-greets. Playing Federation Prince Carmindor is all he’s ever wanted, but the diehard Starfield fandom has already dismissed him as just another heartthrob. As ExcelsiCon draws near, closet nerd Darien feels more and more like a fake—until he meets a girl who shows him otherwise.

I love this cover! Even the back is awesome! I especially love that the title is a holographic/sparkly silver! It looks awesome! I wish I had the Hardcover purely because of the inside of the dust jacket (I’ll add the images below!) The paperback only shows the parts with the Magic Pumpkin truck on the front and the Trailer on the back. I don’t understand why Gail isn’t on the back cover with Lonny & Darien though! 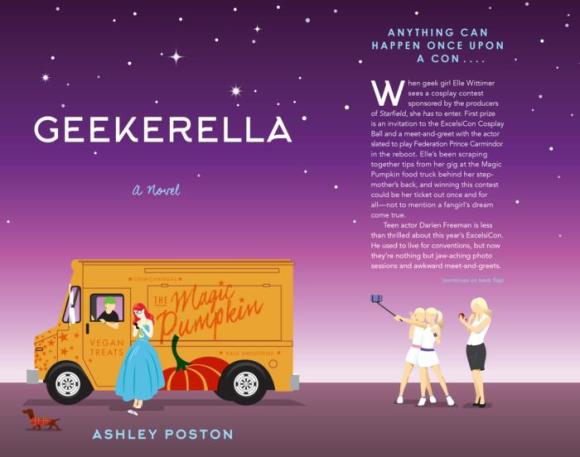 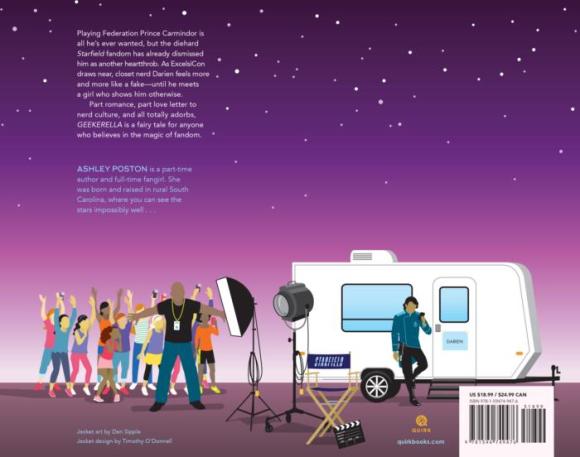 I really enjoyed the writing in this book! I love the split POV from Elle & Darien, it was enjoyable seeing both versions of the story playing out! The writing was easy and quick to read! I did notice a few errors in the book while reading it. Mainly just sentences that didn’t quite make sense, ‘a’ instead of ‘as’ was one I saw and remember. They may have needed another proof reading, but these things happen.

I really enjoyed the plot and all the small similarities between this book and Cinderella! It was fun discovering them throughout the book. The ‘geeky’ theme of this book was awesome to read! Reading about bloggers, vloggers, fandoms and everything else was so much fun! I’m not a huge fan of the fairytale ending trope when it comes to relationships but I did enjoy it in this book thanks to everything else that made this book! I also loved the references to other fandoms like Harry Potter & LOTR for 2 examples! I also love that bit of a spin on the original story when it comes to a certain character! And diversity! Love a book with some good diversity in it!

I loved basically all of them! Elle was an enjoyable and relatable character! Sage was fun and witty. Darien was also relatable to some degree, trying to get a stand on his own two fit and discover what he want’s to do and be not what others want of him. Gail was, not motherly, but that funny Aunt who wants the best for you but will help you get drinks for a party your mum said no to anyway. Lonny was an interesting character, didn’t talk much but when he did it mattered. I love the addition of Tank, he was just a fun like part of it! Catherine was the ‘evil stepmother’ and she played the part well, claiming she knows best but is actually completely wrong. Chloe & Calliope were the ‘ugly step sisters’, but not actually ugly in this case, well by appearance anyway.

I really enjoyed this book! It was was fun, quick and easy to read! I loved the Cinderella parts and the parts that differed from the original story! I loved the diversity and the characters in the book! Was an awesome choice as a book to take a break from all the fantasy!

Good review c: and it’s really a great book. Absolutely loved this one ❤

Great review! we’re really excited to read this book; glad you enjoyed it! We’re new to the book blog community and we’d love it if you checked out our blog and gave us a follow! We look forward to reading more from you!

Some many new people lately! It’s great!!! 🖤
And will definitely checkout your blog when I’m back on my mac! I follow basically anyone back as long as they are a book blogger and post about some of the genres I’m interested in haha.

Don’t feel scared to have a chat. 😊

Ahhhh read this book recently and it was SO. CUTE.

I loooved reading about her blogging, but also it seems kind of weird how she became internet famous over one day??

I DO feel like the romance was rushed when they saw each other, but you know what? IT WAS CUTE.

I understand that about the blog

Pressed send by accident there!
Yeah I understand. Especially seen as she kept saying that Starfield is a smaller fandom. So where did all this followers come from? And how did it get found so quickly?! Bit unrealistic when it comes to that part!

And yeah definitely a bit rushed, but majority of YA Contemporaries are in my opinion anyway, I over look that now while reading them.

I wanna read this book,then. … but I dont have it 😦

Hi Eliza! I dont know how else to contact you,so here i am. If you have read the Twilight saga, i am cordially inviting you to my blog and um… share some thoughts about which team you are on. ( Team E or J) 🙂

Sorry love but I haven’t read nor watched the movies and don’t plan to. So can’t share my thoughts when I have no idea about anything to do with the series outside the hate type photos I see on Tumblr 😂😂

And you can always just comment or message me on my Insta, Facebook or Twitter! Links for all of my social media is at the bottom of all of my posts. 😊

Sorry. I’m not in any of those you mentioned. 😉 Just now started getting out of my socially awkward-introvert-hermit cave. It’ll take time, I guess. 🙂 I just have a blog and mail ID’S in gmail and yahoo 😦