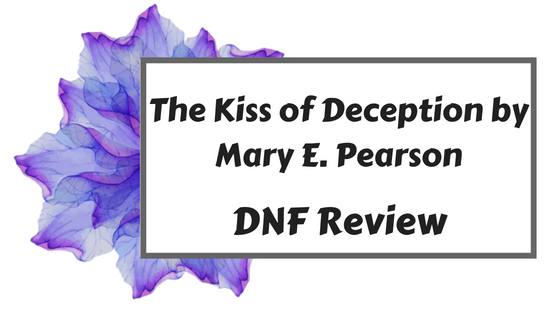 Title: The Kiss of Deception

She flees on her wedding day.

She steals ancient documents from the Chancellor’s secret collection.

She is pursued by bounty hunters sent by her own father.

She is Princess Lia, seventeen, First Daughter of the House of Morrighan.

The Kingdom of Morrighan is steeped in tradition and the stories of a bygone world, but some traditions Lia can’t abide. Like having to marry someone she’s never met to secure a political alliance.

Fed up and ready for a new life, Lia escapes to a distant village on the morning of her wedding. She settles in among the common folk, intrigued when two mysterious and handsome strangers arrive—and unaware that one is the jilted prince and the other an assassin sent to kill her. Deceptions swirl and Lia finds herself on the brink of unlocking perilous secrets—secrets that may unravel her world—even as she feels herself falling in love.

This is probably the weirdest review I will ever write! It is 2:30am and I am laying in bed on my phone right now writing this because I need to get it out! I will make all the proper layout/graphics and crap tomorrow so it looks presentable. But who knows what this review will be.

Okay firstly, I don’t know exactly where I am up to in this book. I am listening to this on audiobook through a new app that the membership works the same as Scribd. But it is crap. It’s Otto Radio btw. The reason this app is crap, well there is more than one. So I’ll just mention 2 main problems. Firstly there is absolutely no way to tell how far you are in a book or how much you have left to go. On Scribd, there is a progress bar where you can see where you are up to. It’s not exact but it’s easy to guess. Audible, has a progress bar too and also when you go into the ‘share my progress’ option you can choose text and a little automatically written message pops up that says something along the lines hey I’m …% through …. book. This one, however, has NOTHING! The other thing that annoys me is that the app splits the book into way more chapters than the book legitimately is. In this specific book you can tell when a new chapter starts because the narrator will say the name of whoever’s POV we are reading from. But each chapter is split into like 3 or something chapters of the audiobook. Seriously every chapter is 3-5 minutes long. So you can never actually tell how much more of a chapter you have left!

Okay, rant about Otto over. I will be cancelling my subscription.

Now onto my DNF review of this book. Like I said. I don’t know where I was up to but based on this audiobook having 165 chapter & I’m up 57 I’m going to say around 1/3 of the book.

Okay, first let’s talk about the false advertisement of this book. This is a ‘YA Fantasy’

Wait, I need a meme or something for this!

I know right Grandma, where the hell is the fantasy?!

I recall 1 mention of magic in the 1/3 ish of this book I read. And that was right at the start where it is mentioned that the MC does not have the power she should have gotten from her family line because she isn’t actually related to both of her ‘parents’.

That is literally it! There has not been a single hint at any magic system besides that slight hint that some families have abilities.

The plot so far has been utterly dull. I was just bored. She ran away, bought some donkies (what the fuck is the plural of donkey, bloody hell I need to go to sleep) and got a job and met two attractive dudes, picked some berries and lied to her best friend because it was ‘easier’ than being honest. I think I’ve covered all the plot so far.

*And no I didn’t bother editing this paragraph when I’m reading this the next day as it cracked me up. Yes I know the plural is Donkeys but it just wasn’t looking right on my phone at 3am*

Next, the. Romancy side of things. Yes, I’m pretty sure I just made up a word.

So we meet the guy and instantly can’t breathe. Great, one of these bitches is it. Moving on.

Then there are the constant thoughts about this random dude you just met. You’re blind mate! There is literally two guys stand in front of you lying their arses off about who they are and you’re just 😍😍😍 them. Good lord.

And when she isn’t thinking about them, her and the best friend (I literally can’t think of either of their names) are sitting around chatting about kissing boys.

Then, of course, there is the innocent servant girl who thinks that handsome army guy loves her. HAHAHA, we all know how that ends in a YA Book.

It’s like instalove & love triangle galore over in this bitch

Okay next! The Assassin.

Gotta love a good Assassin right? Well, we would, if he existed! Seriously if he is an assassin, then I’m a fucking dragon!

Literally, the big bad assassin gets the job. Meets the target and instead of killing her starts giving her heart eyes. He even follows her into the woods and can’t do it. Then continues to follow her and sees her with another male, assumes they are fucking and gets jealous. Dude, you met her what 3 days ago?! My god. Also, they were so not doing that! Thankful there is no incest in this book at least.

Okay, I think lastly, the whole who is who Mystery. So this book’s description is basically the girl gets into an arranged marriage and runs instead of marrying the guy. An assassin & the guy she was meant to marry her try hunting her down. The catch is you don’t know who is who.

Firstly at the start, this is not the case. They say exactly who they are. It’s only when they are meeting the MC that they take on fake names and you don’t know which is which.

As for the mystery, it’s so easy to guess. 1 male makes some a comment about the MC being a lot higher class/wealth than him. Well, that’s obviously the assassin. The other guy has a similar standing to her so it would make 0 sense for him to be thinking about that… so yeah, obvious.

Well, there are all my 3am thoughts on The Kiss of Deception!! Hope you enjoyed the weirdness.