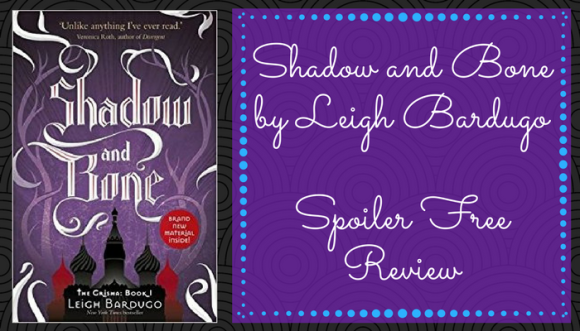 The Shadow Fold, a swathe of impenetrable darkness, crawling with monsters that feast on human flesh, is slowly destroying the once-great nation of Ravka.

Alina, a pale, lonely orphan, discovers a unique power that thrusts her into the lavish world of the kingdom’s magical elite – the Grisha. Could she be the key to unravelling the dark fabric of the Shadow Fold and setting Ravka free?

The Darkling, a creature of seductive charm and terrifying power, leader of the Grisha. If Alina is to fulfil her destiny, she must discover how to unlock her gift and face up to her dangerous attraction to him.

But what of Mal, Alina’s childhood best friend? As Alina contemplates her dazzling new future, why can’t she ever quite forget him?

So I have finally started this series! Hopefully I will be able to get a copy of the next two books in a couple weeks. I have The Hate U Give, Caraval, ACOMAF and ACOWAR coming from book depository and I don’t want to purchase any more books until I read a few more of my physical TBR. Trying to keep on top of my TBR pile.

Also, I went into this book knowing nothing about it except that there were people called Grisha. That is all.

I like the purple cover of this book which is the one I own. The Original is the same but the background is a grey colour instead of purple. I like that the name and the lighter purple vines on the edges are raised on my paperback edition. I believe that the purple edition is the only one with the bonus content, but I may be wrong.

I enjoyed Leigh Bardugo’s writing style. I like how it’s simple and easy to read and also engaging. I wish there was a bit more world building though, there is still things about the world and magic system and different things that I still don’t understand. Hopefully there will be more explained in the next 2 books. I do wish that there was a page that showed how to pronounce some of the words in the series as 90% of them I have no idea how to pronounce still. I like the bonus content too, I didn’t read the interview with Leigh Bardugo, but I did read the letter from Mal that never made it to Alina.

Oh and also there is a map!!! I don’t think I need to say again how much I like maps.

I enjoyed the plot of this book. The whole idea of The Unsea and the Sun Summoner and the Darkling is really interesting. And I also like the name of The Unsea, Unsee, complete darkness??!! This makes me laugh! It’s so good haha. Anyway, I also thought some parts were a little bit predictable. Most things I didn’t know what to expect but knew that something either good or bad was coming to or from a certain person. So not all of it was predictable completely, but a little bit. Which wasn’t bad, but not my favourite as I love unpredictable books. The twist that involved Baghra & the Darkling I did not see coming! I knew there was something there, as is obvious in the book but I did not see that coming!

I enjoyed most of the characters in this book. I liked Alina’s character, she was interesting and strong and I liked learning about her and seeing her develop. The Darkling, I was always a bit iffy and curious about and never fully liked him. At the start Mal was just kind of eh but towards the end I really liked his character and thought he was interesting and I liked seeing the development with him as well. Genya was a character I’m still not 100% sure about. At the start I enjoyed her and thought she was just being nice but towards the end I just don’t know what think and don’t know what side she is on. Baghra isn’t a character you either like or dislike and in the end I was happy with what she did but still don’t particularly like her. Botkin I enjoyed and always imagined him with a heavy Russian accent. Which also kinda put me off to imagine a Russian accent in a fantasy world… But that was just how it read to me.

I enjoyed this book but did have a couple issues with it, mainly in the world building and understanding of the book. Hopefully everything is cleared up in the next book though! Definitely want to continue on with this series.

Let me know if you have read this book and what you thought in the comments! Please warn about spoilers and no spoilers for the rest of the series, please!