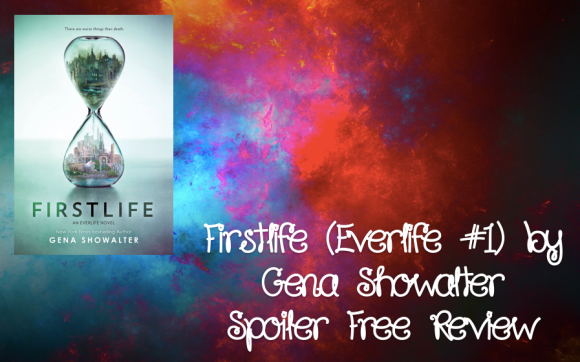 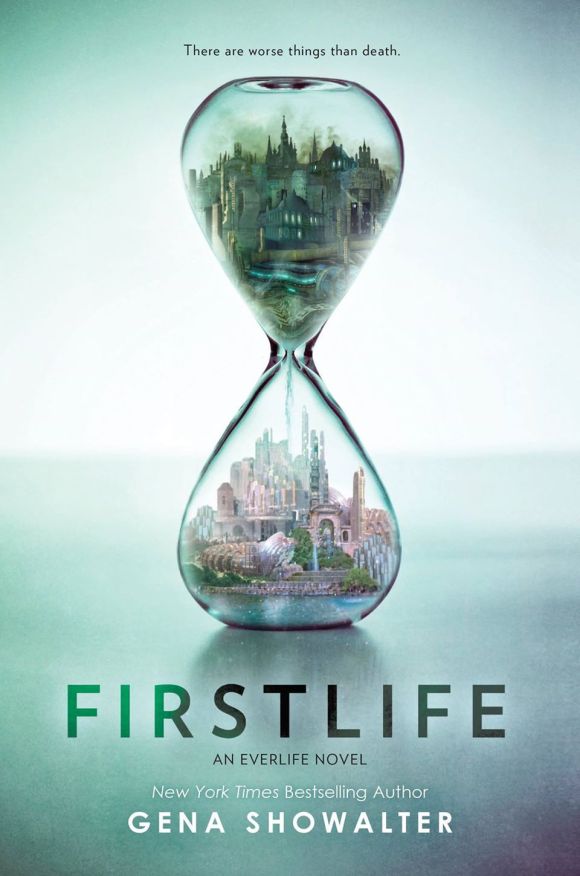 Checkout my review for Lifeblood, the next book in the series, HERE!

I’m going to do something slightly different with this review as I want to add in a section about the book covers into my review. For books that only have one cover I will just share my opinion of them and for books that have more than one I will say which I own and which is my favourite.

This book only has one cover. I like the concept of this cover art, Myriad at the top and Troika at the bottom of the hour glass. Light vs Dark. I also love that they continued this same idea onto the next books cover and I hope they do that for the 3rd book in the trilogy as well.

I did enjoy Gena Showalter’s writing. It wasn’t as beautiful and detailed as the last book I read which I just adored the writing of, but it was still well done. I loved all the little quotes at the top of each paragraph, each paragraph swapping between a Myriad and Troika quote. Some of the quotes were directly related to the realms and what was going on in the book, but some of them can be applied to everyday life as well. For Example:

“Your mistakes do not define you, only the emotion you feel.”
– Myriad

The plot was really good and fairly unique to anything I have read before. There is some things in this book that are in most YA books, like the being treated crappily by parents, which seems to be popping up in sooo many YA books lately (or the lack of parents) and also the strong female who has some ability/power/job to do that she has only just found out about.. But besides those tropes the actual plot is different from anything I have read. And I really enjoyed it! The story did start off a little slow and a little confusing, it took a few chapters to figure out what exactly was going on, but once you got past that little bit at the start it was really good. The book also ending in a little bit of a shocking twist to do with Sloan, which I was not prepared for.

I really liked Ten, of course another strong female character! I also enjoyed Archer & Killian and I liked that they had a backstory and history that came out strong in this book. Sloan was a character where your view of her changed a couple times and you still weren’t sure if she was on the good or bad side. But I get why she did what she did at the end, because of what she was put through. So in my opinion she was still kind of on the good side. Just a very broken good side. She gives me Draco Malfoy Vibes, doing the wrong thing for all the right reasons. There were other characters that came and went in the book that weren’t there long enough to get to know really well, like Elena, Deacon & Clay. I’m guessing we will see more of at least Deacon and Clay in the next book, which I am looking forward to!

I enjoyed this book. I only gave it 4 stars though and that was because it was just lacking a little in a couple areas. But I can also overlook them as I enjoyed the rest of it. I will be starting Lifeblood, the second book in the series, later today.

I was interested in this series a little while ago but didn’t plan on reading it until Lifeblood came out as it was coming fairly soon and then I could read both at once. Then I saw Lifeblood on NetGalley and as it was my first time on there, i didn’t really know what to expect, I requested it and amazingly got approved. So I quickly bought an iBook of Firstlife so I could get to Lifeblood straight away!

So that will be my next review!

Hope you enjoy it when you finally get to it.

I think I will…I love Alice in Zombieland!

[…] You can find my spoiler free review for Firstlife HERE! […]