So in addition to their awesome monthly boxes this month The YA Chronicles released an exclusive Gemina box! When I got the email about this I was so excited and pre-ordered straight away! I absolutely loved Illuminae and you can find my review for it HERE.

If you don’t know what I’m actually talking about then you need to go read Illuminae right now! Gemina is the second book in The Illuminae Files series by Amie Kaufman and Jay Kristoff. Gemina was released on the 18th of this month and I’m so happy to have finally received it! Even though I will not be reading it straight away as I’m currently reading the rest of the Miss Peregrine’s Peculiar Children series!

I won’t go into pricing details for this box as it was a one off exclusive box. If you want to know the regular pricing of a That YA Chronicles subscription box you can find it in my last unboxing HERE.

I will write under each photo what is written on the description card that you get in the box.

Letter from the Authors

Take a read of the letter from the ingenious authors. Sharp and witty, jus like them. The letter is almost as pretty as the book itself. 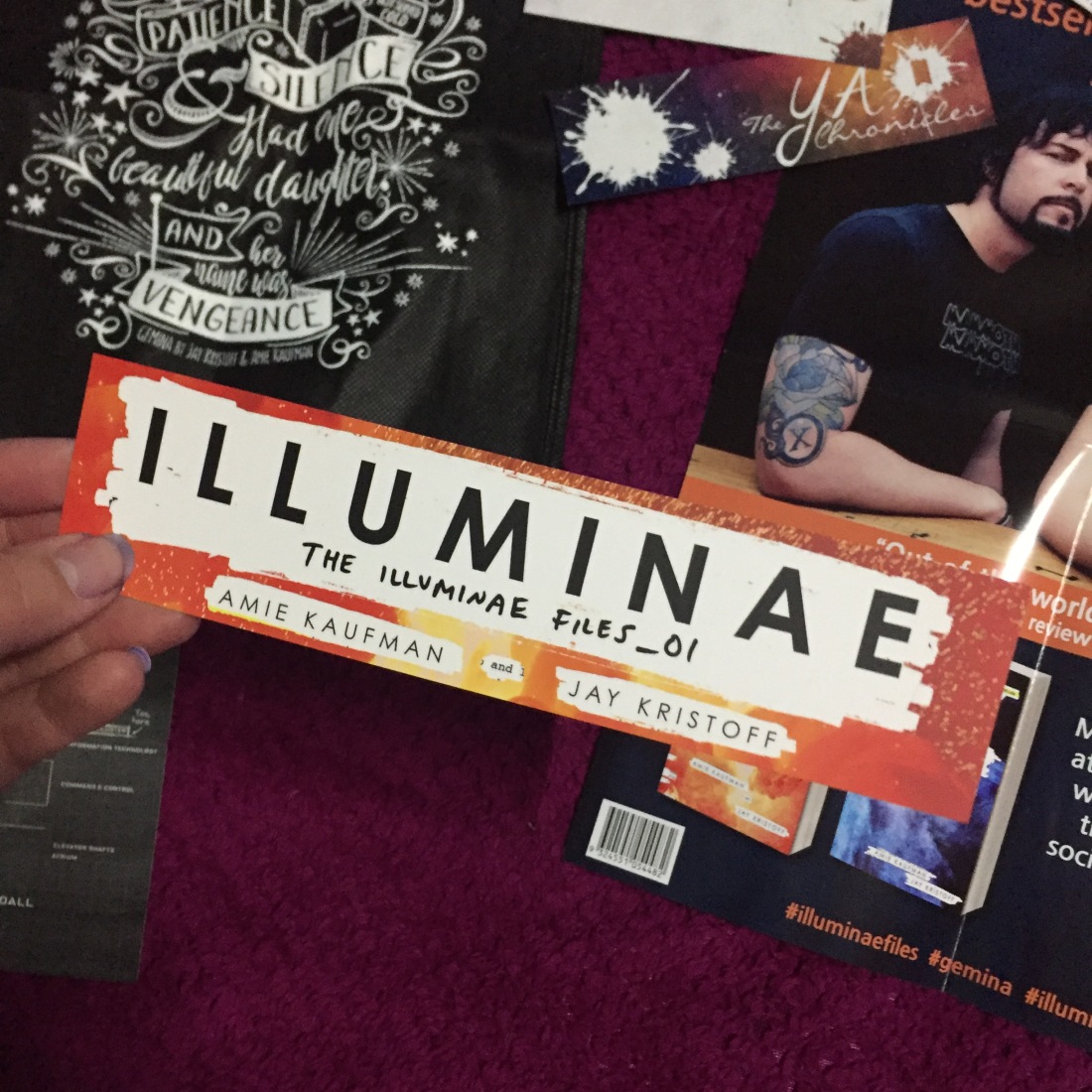 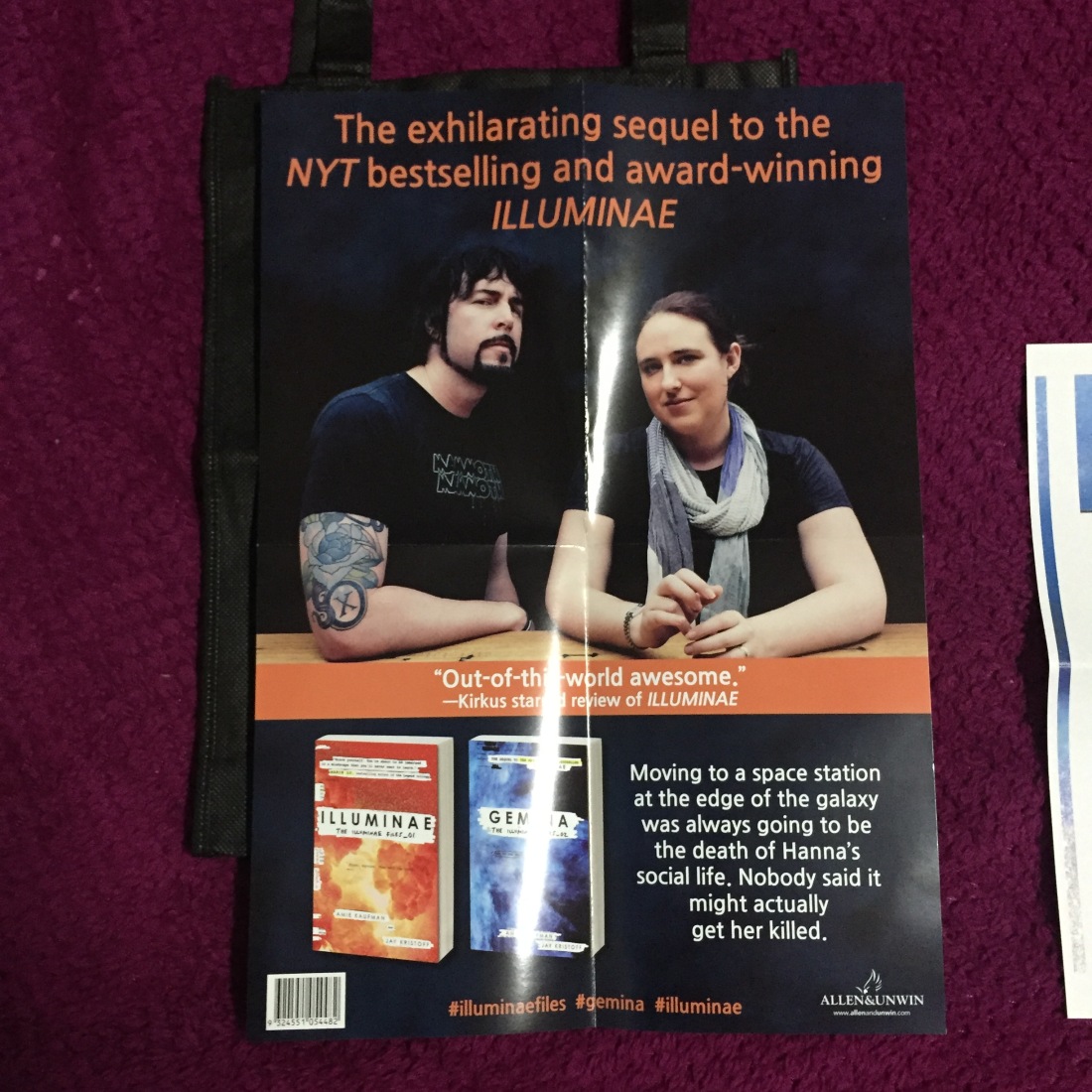 We are absolutely in love with this Gemina Tote bag custon designed by Evie Seo. You can check out more of her beautiful designs on Society6 as evieseo and Redbubble as Eviebookish. 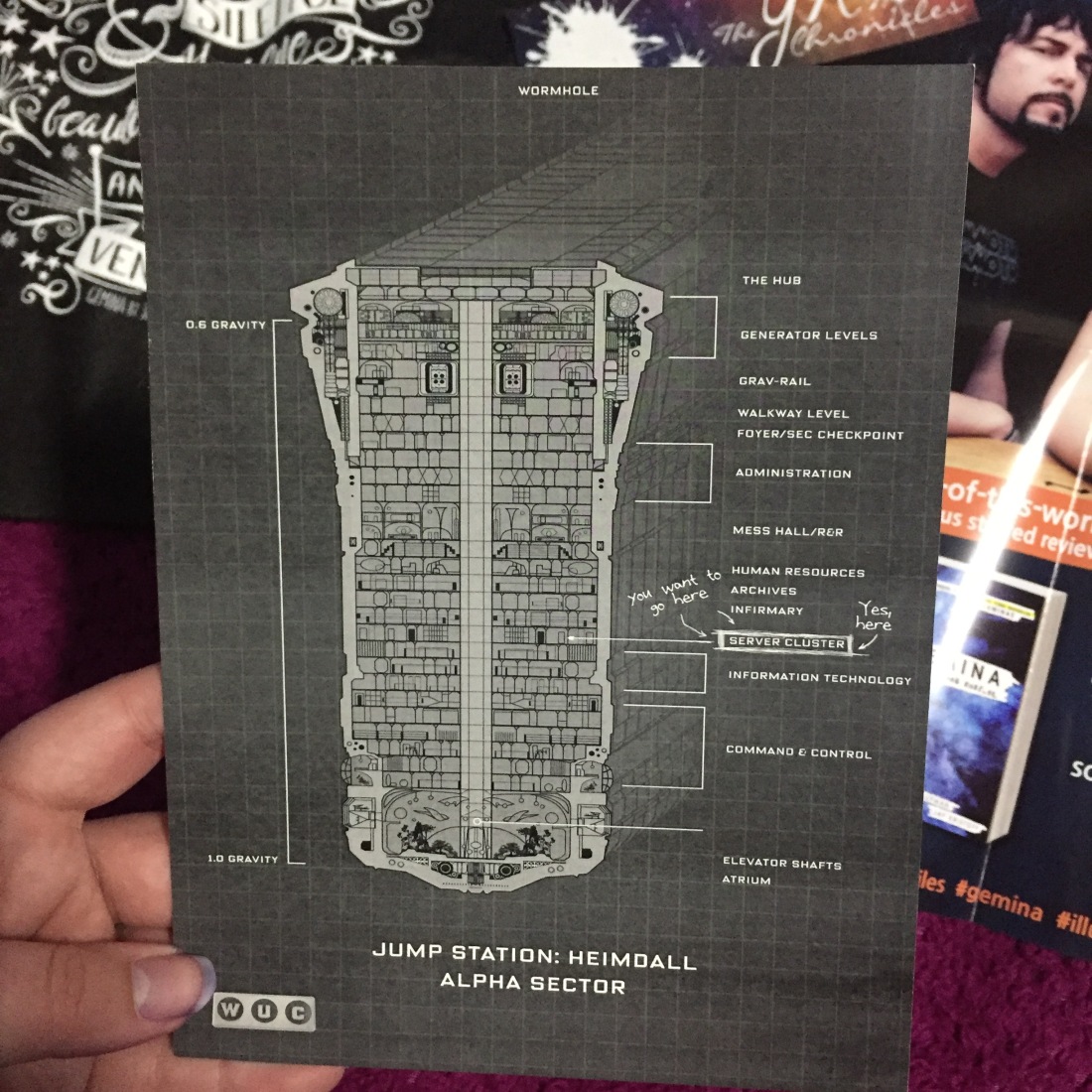 Love the art from the book? Well take a look at this Heimdall Ship schematic print. Hang it up by your reading nook so you can keep track of evry Movement and every plot twist.

I don’t have a picture of this as Mum took it home with her after visiting today haha.

The Rudbubble store TheBookHangover has custom designed this gorgeous Illuminae Microfibre Pouch for you to store your galaxy-saving odds and ends. Don’t leave the house without it. 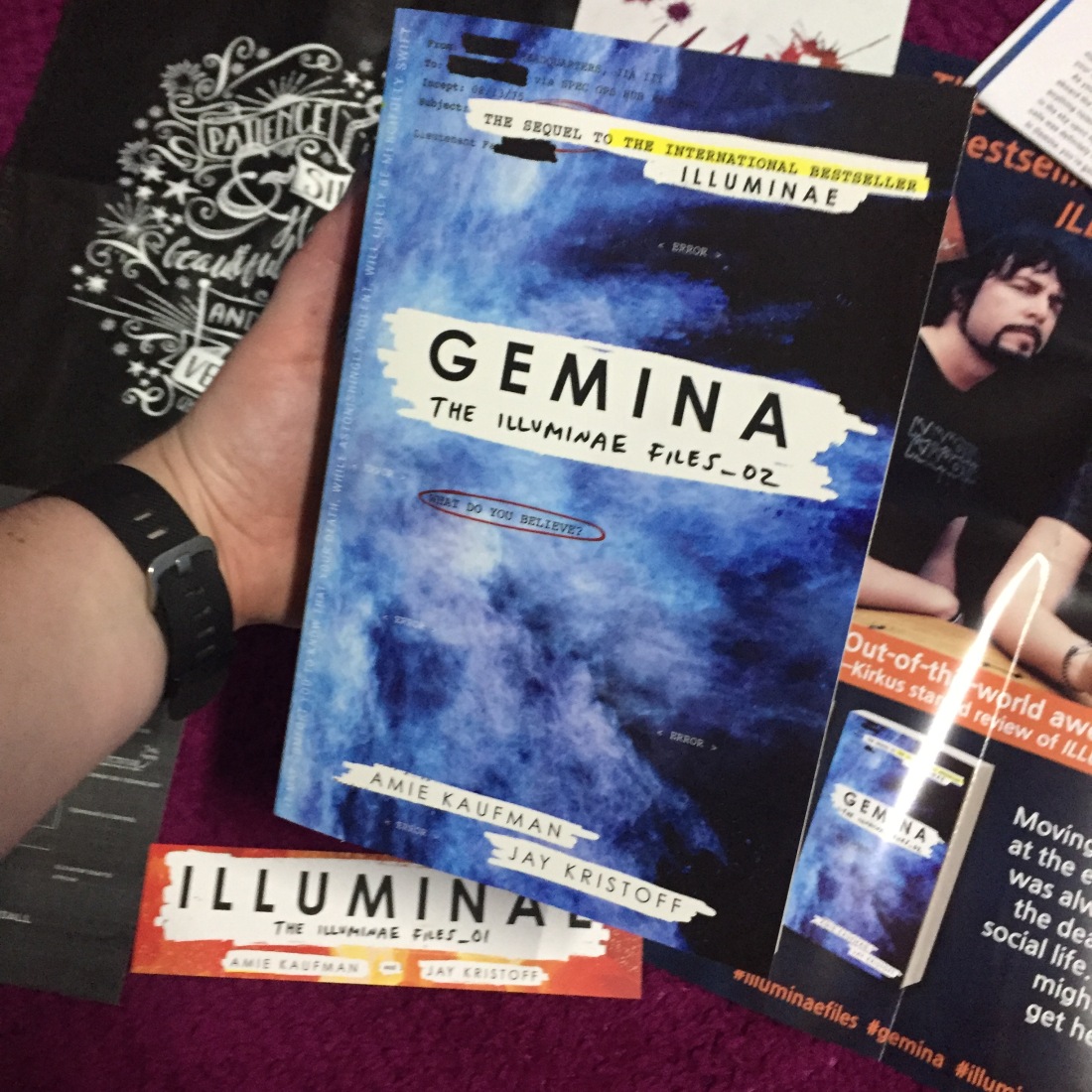 The book of this box requires no introduction. We all know what it is, and we know how excited you are to get your hands on Gemina by the amazing Amie Kaufman and Jay Kristoff. The Second book in The Illuminae Files. Now it’s Hanna and Nik’s turn to fight the next wave of the Beitech assault. But best of all, the book is signed by the Authors.

YA Chronicles card and bookmark 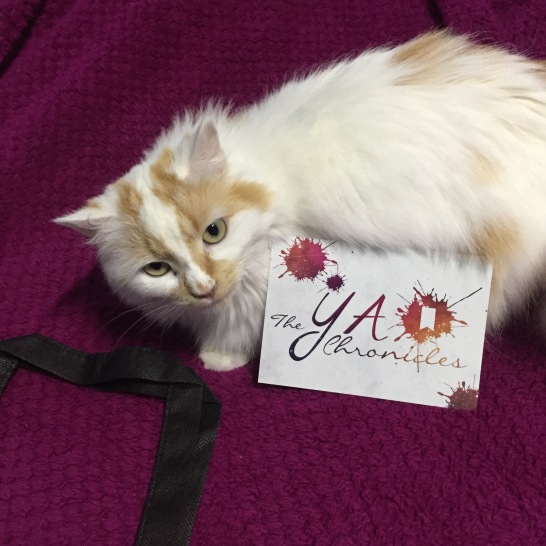 In every YA Chronicles box, you also receive the car listing all the items and a bookmark that is a different colour every month and has the months theme on the opposite side. 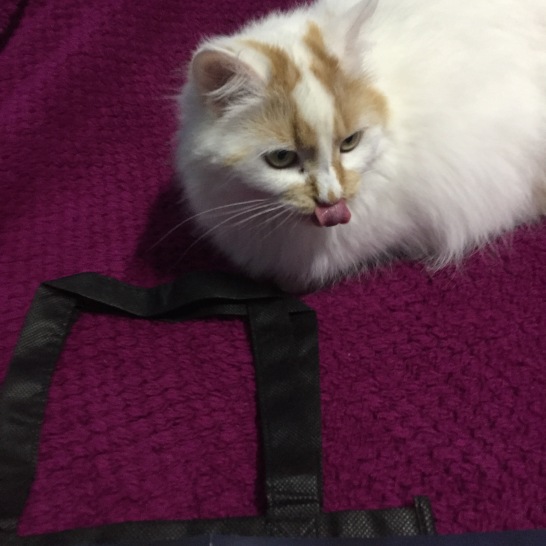 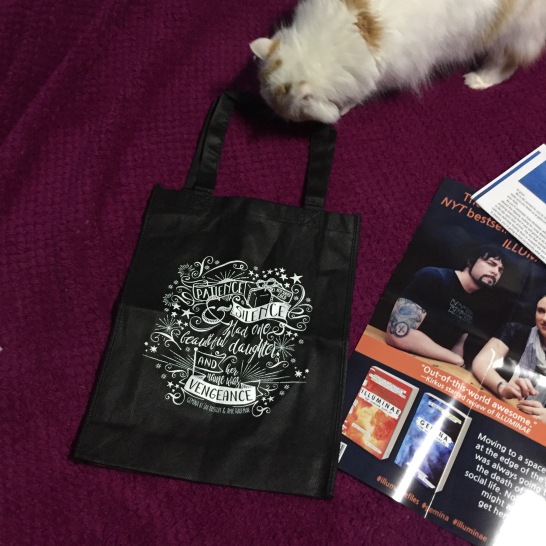 Also, my cat wanted to help me take photos (and also chew the handle of the tote bag).

This morning, Kady thought breaking up with Ezra was the hardest thing she’d have to do.

This afternoon, her planet was invaded.

The year is 2575, and two rival megacorporations are at war over a planet that’s little more than an ice-covered speck at the edge of the universe. Too bad nobody thought to warn the people living on it. With enemy fire raining down on them, Kady and Ezra—who are barely even talking to each other—are forced to fight their way onto an evacuating fleet, with an enemy warship in hot pursuit.

But their problems are just getting started. A deadly plague has broken out and is mutating, with terrifying results; the fleet’s AI, which should be protecting them, may actually be their enemy; and nobody in charge will say what’s really going on. As Kady hacks into a tangled web of data to find the truth, it’s clear only one person can help her bring it all to light: the ex-boyfriend she swore she’d never speak to again.

Told through a fascinating dossier of hacked documents—including emails, schematics, military files, IMs, medical reports, interviews, and more—Illuminae is the first book in a heart-stopping, high-octane trilogy about lives interrupted, the price of truth, and the courage of everyday heroes.

Moving to a space station at the edge of the galaxy was always going to be the death of Hanna’s social life. Nobody said it might actually get her killed.

The sci-fi saga that began with the breakout bestseller Illuminaecontinues on board the Jump Station Heimdall, where two new characters will confront the next wave of the BeiTech assault.

Hanna is the station captain’s pampered daughter; Nik the reluctant member of a notorious crime family. But while the pair are struggling with the realities of life aboard the galaxy’s most boring space station, little do they know that Kady Grant and theHypatia are headed right toward Heimdall, carrying news of the Kerenza invasion.

When an elite BeiTech strike team invades the station, Hanna and Nik are thrown together to defend their home. But alien predators are picking off the station residents one by one, and a malfunction in the station’s wormhole means the space-time continuum might be ripped in two before dinner. Soon Hanna and Nik aren’t just fighting for their own survival; the fate of everyone on the Hypatia—and possibly the known universe—is in their hands.

But relax. They’ve totally got this. They hope.

Once again told through a compelling dossier of emails, IMs, classified files, transcripts, and schematics, Gemina raises the stakes of the Illuminae Files, hurling readers into an enthralling new story that will leave them breathless.

Well, that’s it! let me know if you have read Gemina yet and if you enjoyed it! Please, no spoilers!! Also no spoilers for Illuminae or if you do put a warning up.