The battle for the crown has begun, but which of the three sisters will prevail?

With the unforgettable events of the Quickening behind them and the Ascension Year underway, all bets are off. Katharine, once the weak and feeble sister, is stronger than ever before. Arsinoe, after discovering the truth about her powers, must figure out how to make her secret talent work in her favor without anyone finding out. And Mirabella, the elemental sister once thought to be the certain Queen Crowned, faces attacks like never before—ones that put those around her in danger she can’t seem to prevent.

Fennbirn’s deadliest queens must confront the one thing standing in their way of the crown: each other. 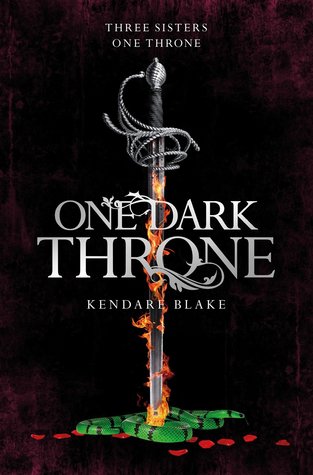 I feel like the Three Dark Crowns & One Dark Thrones books look so much better in person than the images you find online. I love how that most of the book is dark and then there is the pop of colour in the middle representing the 3 queens.

My favourite part about this book is the Multi-POV. We follow I think around 10 or more people. Mostly the three queens, Arsinoe, Katharine & Mirabella but also Jules, Joseph, Natalia and a few more. This made it easy to get every POV of the story and not just hearing the stories from other characters. It makes for a very in-depth read!

I love the map in this book! And I also really enjoyed the addition of a ‘Cast of Characters’ list. This was a handy little recap when jumping back into this series after such a long break between books.

Also, I’m just going to completely ignore the love triangles in this book!

This plot is intense. It’s just one thing after an another which makes this book gripping and completely unpredictable! You don’t even have a chance to think about’s what’s coming because it’s so fast paced and action packed. The ending was a little underwhelming. The last book ended on a huge cliffhanger whereas this one kinda just ended. Usually, I come out of a great book thinking ‘I NEED MOREE!’ but with this one, it wasn’t as much of the case. I kinda felt like the end of the story but there is a third book coming.

I feel like there is kinda 2 main characters out of all the POVs and those are Katharine & Arsinoe.
Arsinoe has finally grown into her character in this book. She has accepted that she has a chance in this and she turns into such a strong and caring character!
Katharine is just cruel and obsessed with being on top. Her choices were reckless and it felt like she never fully thought anything through before doing it. I wouldn’t say she was a ‘well-done villain’ but she was definitely determined and cunning.

Mirabella kinda took a back seat in this book. She was just kinda there and just did what others wanted or told her to do. There was only once where she really stood up and made a change in her life but it didn’t last long. It definitely felt like there was more effort put into Arsinoe & Katharine than in Mirabella! I really hope more is done with her in book 3.

Jules was a bit iffy in this book. Yes, she is strong and loyal to Arsinoe but she also got a bit annoying in this book. I can’t really talk about this without spoilers but I can basically only say that she was kinda strange and made some questionable choices in this book. I know there is a reason for it but it was still annoying.

Madigal irritates the crap out of me. She just makes so many choices that you are thinking ‘what the actual fuck did I just read!’

Joseph was okay. I didn’t love him in book 1 but I do like him a little more in this one. I can’t talk about why without spoilers for book 1, but he does something in book 1 that I hated but in this book not only does he discover that choice he made was not 100% his vault (someone else uses low magic that affected him) and he redeemed himself a bit in this book.

Nicolas is just irritating. He is obsessed with anything that will get him power and as soon as he gets that power he abuses it and pays the price for it. I actually laughed at what happens to him.

Pietyr was just kinda desperate. He wouldn’t take no for an answer and always thought that he knew what Katharine wanted and what she said she wanted wasn’t valid and that pisses me off.

Billy is probably my favourite male character. Well compared to the 3 above, he is my favourite as the others are kinda horrible. But Billy is kind, loyal and loving. Also, I don’t think he was involved in a love triangle like some people say. If you want to know why I think that then keep reading (in bold) but it will contain spoilers! So just skip to ‘Overall’ if you don’t want to spoil yourself!
So when Billy goes to Mirabella it is done for a reason and that reason is not to for a relationship. He even says he tried to hate her but she was too nice and they came to an understanding. When they think Arsinoe is killed then they form an agreement for him to become king if Mirabella wins as a way to fight back against Katharine. When they find out Arsinoe is not dead there is no question about Billy going to her. He never loved Mirabella, it was simply a mutual agreement and mutual goals.

Overall I loved the plot! It is action packed and fast paced. The writing is really good and I loved the Multi POV! Some of the characters are great and some are a bit iffy and some are just what the hell! I really hope book 3 expands on Mirabella a bit more!