Ellie and her friends have achieved more than they ever thought possible as an unarmed bunch of amateur teenage fighters. But it’s not enough. The war wages on, their families are in captivity and their country is on its knees. Hiding back in Hell, the friends face a big question: what to do next?

The gang have another success when they manage to rescue Kevin. He returns to them equipped with a new knowledge of explosives. Suddenly the question of what to do next becomes clear – launch an attack on the major enemy target of Cobblers’ Bay.

Can Ellie, Homer, Fi, Robin, Lee and Kevin really stage a major military attack on the enemy? And in their attempt to pull it off, what will they have to sacrifice? They have already lost Corrie and Chris; who else will the group have to lose in their desperation to defend their country?

The Third Day, The Frost, draws the reader deeper into the struggle of these ordinary teens attempting to survive in extraordinary times. A tense and moving read that will stay with you forever.

I don’t really understand this cover. I just don’t get the shell or pearl. But I do prefer these editions visually than the other covers, hence why I choose these. But I don’t understand!

I love the writing of these books! The writing is really unique! The book is written as if the main character has written it after the events of the book. So you get what happened, Ellie’s thoughts while the things happened and also her thoughts while writing the story. I love this method of writing and John Marsden does it amazingly!

These books are action-packed and extreme in every way! Even when there isn’t much going on it still feels kinda full because we are getting Ellie’s thoughts. But also they skip over the parts that would be really dull as this is Ellie telling the story of what actually went on and all the action, so that is good. It makes for quick and gripping reads.

I love all the characters in one way or another. Ellie feels like the most realistic character I have ever read. Even though she is appearing brave and in charge to the others, she is falling apart inside and it’s good to see that. Even though she is struggling she gets in and does what she needs to do and will always do anything to protect the group.

I felt like in this book the other characters were slightly more distant than in previous books. They do spend a majority of their time together but as they are all so broken and most of the time they just want to sit in the quiet alone, there isn’t as much connection between Ellie and the other characters. However, I didn’t mind it. I love reading from Ellie’s POV and they still got altogether when they were planning stuff and doing big things, so it didn’t feel like they were completely absent.

Overall, I love this series. It gripped me when I read the very first book in high school for English class and it only gets more intense. It is kind of a scary book in a way as this is the most realistic dystopian type book I have ever read. It’s the closest to what could actually happen and that is terrifying and also it’s set in Aus. So it feels way too close to home for me.
Also, there is something that happened in the last couple pages of this book that killed me. I don’t remember if I have cried in either of the last 2 books, but I did in this one. 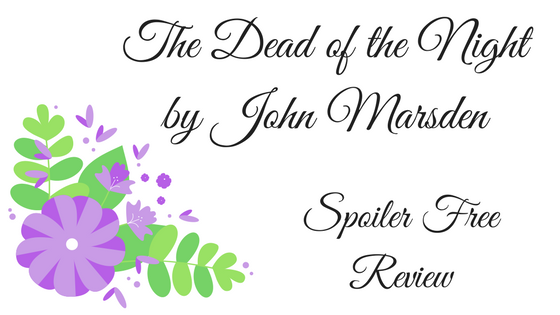 Australia has been invaded and nothing is as it was. Six teenagers are living a nightmare in the sanctuary of a hidden valley where nothing and no-one is safe.

You can find my review for book 1, Tomorrow When the War Began, HERE!

I still really enjoy the writing for this. The book is written from Ellie’s memory. So it’s a combination of what happened, her thoughts when it was happening and also her thoughts while writing it. Which is really different and interesting. The only thing I wish that was different, is I wish there was a map in the book as it’s hard to visualise the tower and where it is compared to Cobbler’s Bay and the other towns & Hell.

I love how action packed these books are. As it’s from memory the boring, sitting around is just skipped over and they concentrate on either when they are planning or when they are actually doing something. So the plot is always really enjoyable and most of the time fast paced. It makes for really quick reading!

I really enjoy all the characters. The only character I didn’t like in the first book was Kevin and he wasn’t in this one. So that was good. I really like Fi & Homer the most. They are all so different, personality wise.

The only character I kinda liked in the other group they run into is Olive. I liked that she was honest & didn’t just treat them like kids, like everyone else did from that group.

I really like this book and this series so far! I’m so happy to have finally continued with this series after first reading it in about 2011 or 2012 for school! They are action packed and extreme books and also a little scary. This is the most realistic dystopian type book that I have ever read. It’s also really close to home as it’s based in NSW, Aus. It’s also 100% possible that something like this could happen so that just makes it a little scary. But they are still amazing books and I can’t wait to continue the series!

I have just ordered the next 2 books, but I can’t get the last 3 in the matching editions so I will have to wait until I can find the matching ones. And I don’t want to buy the eBooks as they are 10 each and the physical books are between $10-$12, so I don’t see the point in wasting my money.