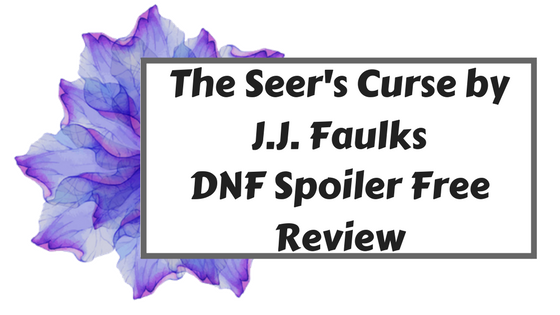 Orleigh is cursed. Or so the other villagers believe. With each harvest worse than the last, something must be done. And so they consult the Seer. A deal is struck: the village will thrive once more, but in return, Orleigh must be sacrificed to the Earth God, Teymos.

Years later, when Orleigh’s closest friend, Piprin, learns that Orleigh might still be alive, he resolves to rescue her and to return her to the Land of Mortals. Guided by the Seer and the myths of his childhood, Piprin sets out on a quest to the Land of Gods, where mortals like him are forbidden.

But will Piprin survive his quest? And why is the Seer so interested in Orleigh’s fate?

A tale of friendship, acceptance and self-discovery, filled with a new mythology, The Seer’s Curse is a moving debut to be enjoyed by all fantasy fans. 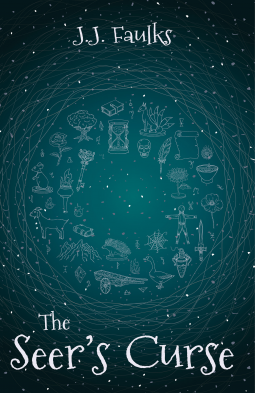 The cover art is really interesting and was the main thing that caught my eye when I saw this book on NetGalley. The cover looked awesome and the synopsis sounded promising, so I requested it. I like all the small drawings on the cover and now after reading some of the books I actually get what most of them are/mean.

So honestly, this book was just boring. I DNFd at 51%, so I gave it a fair chance but so far it was just dull and not much has happened.

The book felt very familiar. The whole idea of a child is born and things start going wrong and the village thinks the child is at fault or cursed and blames them for everything *cough* The Trials of Morrigan Crow *cough*. There was also a story in, I think, Language of Thorns by Leigh Bardugo that started similarly. So I wasn’t overly impressed with the set up for the story.
There was also the idea of the Seer, which I thought was kinda pointless. He basically just watches over everything. Which also reminded me of the movie Happily Never After, with the pig and whatever the hell that pink thing is watching over the fairytales playing out. However, in this one, the Seer doesn’t have a magical set of scales that if bumped everything goes to hell. The seer does, however, have a map thing that he moves pieces around on that represents the different characters in the story. I saw someone say that he uses the map to control the characters, but in the couple times, the map was mentioned in what I read that wasn’t the case. It was more like he moves them around after something happens so he can keep track of where they are. So no he isn’t controlling them with the pieces. Also for that reason, I think it was kinda pointless, why does it matter if he keeps track of them on a map? Really what did that add to the story? But also, did the author get that idea from that map in Spy Kids were the weird scientist dude keeps track of the hybrid creatures on the island from inside his volcano?????

The writing wasn’t anything to rave about either and I didn’t enjoy the multi-POV. It wasn’t specified at the start of the chapter whose POV we were reading from, which can be fine if it is written well. However, all the POVs just felt the same, there was nothing distinct that made it feel like a different person’s POV. It also just randomly swapped to a person that we hadn’t heard from before, so that got confusing as well.
I also didn’t like the huge jump in time. The first jump was fine. We see Orleigh’s birth, which played a part and then we jumped to when she was a kid. That jump in time was fine, it was done well. The next one is after Orleigh is taken to Teymos and it jumps 10 years ahead. That would be fine, however, nothing adjusted to account for the fact that the main person we are following at the time is no longer a kid, he is like 17 or something now! Yet, he still acts like a whining child and it feels like he hasn’t grown up at all. There was just a bit of disconnect with Piprin after that point.

I did like the addition of the ‘myths’ throughout the book. They were just short little tales that Piprin’s mother told and they were quite interesting. They always had a moral to tell that helped the kids through something that was going on in the story.
Those were the only things that really stood out as well done for me, so this section is very short.

Overall, it could have been a lot better with a few small tweaks. I in no way hated the book, but it just wasn’t captivating my attention and it felt like just a few aspects that I have seen before in movies and books thrown together. Which wasn’t enough to motivate me to continue reading.

I was provided with an eGalley of this book in exchange for an honest review. Thank you very much to Matador & NetGalley for this opportunity.

You can purchase this book at any of the below links!