For her sixteenth birthday, Vaela Sun receives the most coveted gift in all the Spire—a trip to the Continent. It seems an unlikely destination for a holiday: a cold, desolate land where two nations remain perpetually locked in combat. Most citizens lucky enough to tour the Continent do so to observe the spectacle and violence of battle, a thing long vanished in the peaceful realm of the Spire. For Vaela, the war holds little interest. As a smart and talented apprentice cartographer and a descendent of the Continent herself, she sees the journey as a dream come true: a once-in-a-lifetime opportunity to improve upon the maps she’s drawn of this vast, frozen land.

But Vaela’s dream all too quickly turns to nightmare as the journey brings her face-to-face with the brutal reality of a war she’s only read about. Observing from the safety of a heli-plane, Vaela is forever changed by the sight of the bloody battle being waged far beneath her. And when a tragic accident leaves her stranded on the Continent, Vaela finds herself much closer to danger than she’d ever imagined—and with an entirely new perspective as to what war truly means. Starving, alone, and lost in the middle of a war zone, Vaela must try to find a way home—but first, she must survive. 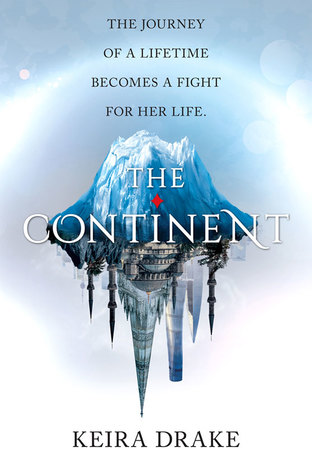 The cover art I really don’t understand. On the bottom, I’m assuming is the Spire and on top a glacier? There were a couple icebergs mentioned in the book, never with a real purpose and a lot of snow, but never a glacier. So I simply don’t understand what the point of that being on the cover is. Also, the city displayed on the bottom doesn’t look anything like how the Spire was described.

The book is poorly written, to be honest. I don’t have much to say about it really. It is just meh. My main problem with the writing though was its extreme predictability! Especially at the start of the book. If you are like me and don’t read the synopsis of books, then you wouldn’t have any clue what books would be about.
So yeah, I didn’t have a clue what this book was about but I soon guessed as it was blatantly obvious what was going to happen! Literally, the most predictable thing in the book was towards the beginning and that thing is vaguely mentioned in the synopsis of the book. Spoilers ahead in italics! So, for some base info, the event was a plane accident. Leading up to the plane accident it is mentioned 100 bloody times that none of their planes has ever crashed. They even say multiple times that they took 5 out of the 6 escape pods out because they had never been used in any of the planes and they were a waste of space. Take any guesses at what happens? Of course, the plane is going down and the MC’s parents put her in the escape pod… I saw it coming from the first time they mentioned that the plane wouldn’t crash, like how could they have made it any plainer!?

I’m not going to talk about all the Racism comments that a lot of people are claiming. When I read fantasy books I don’t even think about similarities to races and such in the real world. So no, I didn’t see the similarities between the people of the Continent & our own Native American & Japenese people.

I have a couple problems with the plot, besides the predictability. The main one is the ending! It ended so abruptly! The battle went for a little bit but then within one or two pages everything was over and resolved! Of course, what happened was also so obviously coming but was meant to be a huge plot twist.

The characters were underwhelming and a bit typical. I also felt absolutely no connection to any of them and the only one I even slightly cared about was Noro’s little brother Keiji as he was really awesome and a cute character. So yeah, beside him I don’t have anything to say as I didn’t like them or hate them.

Overall I didn’t love this book. The best thing was that it was a really quick read as it was only 300 pages. The book was extremely predictable & just not set out very well. It felt like they spent a bit of time on the beginning but had a max of 300 pages allowed and got to page 280 and was like ‘holy fuck better wrap this up’ and that was the last 20 pages just thrown together and ending so suddenly! And where the hell was the map?! There was so much talk about this amazing map that the MC made of the Continent and you still don’t put a map in the front of the book (as I read the eARC, there may be a map in the final copy, if there is just retract what I just said).

I was provided with an eGalley of this book in exchange for an honest review. Thank you very much to Harlequin Teen Australia & NetGalley for this opportunity.

You can purchase this book at any of the below links!