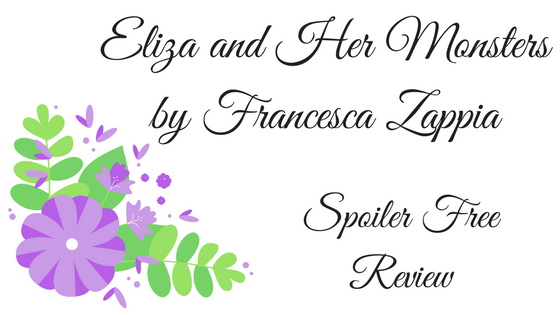 Her story is a phenomenon. Her life is a disaster.

In the real world, Eliza Mirk is shy, weird, and friendless. Online, she’s LadyConstellation, the anonymous creator of the wildly popular webcomic Monstrous Sea. Eliza can’t imagine enjoying the real world as much as she loves the online one, and she has no desire to try.

Then Wallace Warland, Monstrous Sea’s biggest fanfiction writer, transfers to her school. Wallace thinks Eliza is just another fan, and as he draws her out of her shell, she begins to wonder if a life offline might be worthwhile.

But when Eliza’s secret is accidentally shared with the world, everything she’s built—her story, her relationship with Wallace, and even her sanity—begins to fall apart.

I like the cover art but I also don’t like it. I think the cover art is awesome but it doesn’t fully match the book. At no point in this book do they mention Eliza painting! It’s always drawing, so even though I like the look of the cover, it’s still not accurate and that annoys me.

I really enjoyed the writing in this book! It flowed really well and was really easy to understand even for someone who has 0 experience with webcomics and that hole of the internet. I also loved the addition of my text messages & drawings! I love a book with little extra things in them and this was definitely one! I really liked the drawings and also little bits and pieces of the webcomic. Even though the webcomic story was a little confusing as it’s part way through the webcomic that they show and trying to keep track of the characters in the webcomic story was a bit of a task too as I would forget between each part of the comic as it was only ever 20 or so pages! But besides those little things, I really enjoyed the actual story itself.

**TRIGGER WARNINGS!**
Mentions & thoughts of suicide within this book.

To be completely honest the main plot of this story I guessed before even starting the book. So it was just a point of waiting for it to happen. I also found this part of it kinda similar to Simon vs. the Homo Sapiens Agenda when it came to the ‘everyone finding out the secret through the internet’ type of thing. But besides that, I really enjoyed everything else in the plot of the book! I also think that everything was done really well and realistically. Sometimes I feel like some contemporaries just go overboard and border on unrealistic, but I definitely think that this book was done really well and never went too crazy!

Okay, so I may be a bit prejudice as the MC and I share a name, but I really liked Eliza. I loved that even though she struggled with a lot of social situations she never let it actually get her down. She pushed through and knew her limits in situations she could control. She also felt relatable even though I don’t have much in common with her.

Wallace, I liked for the most part. However, after the secret was out I did not like his attitude in the slightest and even though he apologized it was only because he realised how far he had pushed her. But before that, he was selfish and obsessive and I was not okay with it at all.

I really like Eliza’s brothers! Church and Sully were so funny but also super understanding. They were also super surprising too and some of the stuff you find out I was not expecting at all! I kinda wish we could have a companion novel following them as they were my fave characters!

Eliza’s parents are a bit hard to judge.  I understand them completely as all they were trying to do is be involved in their daughter’s life but they didn’t understand how and Eliza never seemed to try and help them be in her life. And it frustrated me sometimes how Eliza reacted to them, but they also did kinda push some boundaries sometimes. Family dinner is not the right time to discuss whether your daughter should start birth control for an example! That is something that should be discussed in private, not with both parents and 2 brothers in the middle of dinner. So some of the time I did understand Eliza but also a larger part of the time I understood her parents struggle. That’s also another reason why I like Church and Sully because they took the time to actually explain to their parents what they did wrong to Eliza when she was just pushing them away and getting angry at them when they had no idea the whole situation! How could they know when she never told them the whole truth and kept the money side of it a secret from them.

6 replies on “Eliza and Her Monsters by Francesca Zappia”

I loved this book! It was one of my favorites this year. I agree that the comic was a bit confusing.

It really was. I kinda wish they had just out drawings without the words. Then it wouldn’t of mattered as they would just be random drawings.

I have to agree. That could have made it a lot less confusing.

[…] You can find my spoiler free review of Eliza and Her Monsters HERE. […]